Listen to the full interview here from 1 hour 32 minutes >

ARTICLE: Fade to Black to screen in Port Macquarie

Controversial. Confronting. Comforting. All words for a subject people don't want to think about, much less talk about. And yet we must - for we will all die sometime, somehow, somewhere. The award winning documentary, Fade to Black, delivers the story of Peter Short, CEO of Shell Express Service Stations in Australia who was terminally ill with incurable esophageal cancer. After talking himself out of a violent suicide, Peter instead decides to take matters into his own hand

Listen to the full interview here > 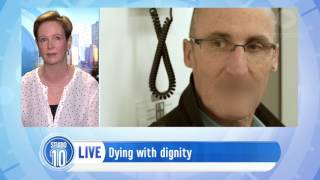 SYNOPSIS: Peter Short was the CEO of Shell Coles Express in Australia. On his 57th birthday he was diagnosed with terminal oesophageal cancer and told he had less than nine months to live. After talking himself out of a violent suicide, Peter decided to take matters into his own hands by trying to source the lethal and illegal drug Nembutal. Peter passed away in December 2014, outliving doctor's predictions by nearly three months. Fade to Black explores the complexity of 'vol

INTERVIEW: Elizabeth Short on The Project

ARTICLE: Tony Abbott has a surprising view on assisted suicide according to new documentary Fade to

HE’S known for his devout Catholic views, but former Prime Minister Tony Abbott has a surprising view on assisted suicide, according to a new documentary. WHEN documentary maker Jeremy Ervine listened in on a dying man’s phone call with Tony Abbott, he was floored by some of the then-prime minister’s views. Chief among them, Mr Ervine says, was Mr Abbott’s opinion that the law wouldn’t necessarily be used to punish people who take action to end the lives of suffering Australi